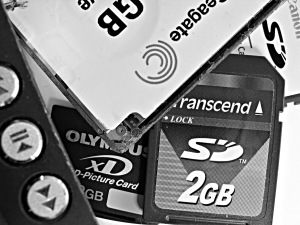 Most of modern memories which are being used for storage of data are based on same or similar principle. Technology of almost all digital devices is very simple. There is always a memory chip which comes along with suitable controller and that’s basically everything when it comes to this storage device or memory.

Memory chip is practically a part of all types of memory cards, USB flash drives as well as other digital media which is based on NAND technology and usually are delivered in TSOP-48 case.

Data Solutions Laboratory was the first company in this part of the Europe that took part in data recovery from damaged digital media. Most of people consider this kind of data recovery almost impossible and we can say that this statement is correct only in case when memory chip is broken (crashed or burned). In most of the cases problem is related to controller responsible for writing the data to memory as well for reading. In that case there is almost 100% possibility for successful data recovery.

Approach used for reading or writing of data differ from one manufacturer to another and that’s what makes our job even harder. To put it simply, the logic goes like this. Controller is based on pre-defined algorithm for writing and reading of data. In order to complete data recovery with success we need to brake this algorithm. Implemented algorithm is based on protected logic, in other words it has been patented by manufacturer and it is not available to public.

Data stored in memory is organized in totally different manner than on hard disks. Memory has been divided to pages, size or logic for the particular page depends on type of the implemented algorithm. In addition the page layout in the memory itself is not based on linear logic so it can be several different variety or mix according to implemented algorithm.

For successful data recovery it is necessary to:

After suggested steps has been made, the data can be accessed in logical form according to file system. In almost all cases the FAT 12 file system has been used and we have to recreate tree of stored data. After logical structure has been successfully recreated, the data can be copied.

There are exceptions, of course. Mini or Micro SD cards have no controller installed and on the other hand there are some cases where devices use encrypted pages which cannot be decrypted in case of malfunction of installed controller.

Data Solutions Laboratory has a high success ratio in data recovery from all types of USB disks, which is over 90% and we are also recovering data from SSD drives by routine.